There are many types of Rummy. This card game is a popular source of entertainment for both Indian locals and players from other parts of the world. There are different types of Rummy that appeal to different players depending on their level of expertise, personal preference, and location. However, all the types of Rummy focus on melding of cards. Melding of cards means grouping cards based on their similarity. The Classic Rummy is more than 200 years old. It has evolved over time, and it is played different in different parts of the world. Players continue to come up with new variations of the Classic Rummy. They include the following.

This type of Rummy is also called the 80 points Rummy. It is one of the simplest and most interesting types of Rummy. It is a form of the 13-card Rummy. It is very short, and one session may only last a few minutes. This type of Rummy is great for beginners. Learning how to play Points Rummy makes it possible to learn other types without much struggle. When a player makes a valid declare, their winnings are calculated depending on the points of the other players.

When playing this game, each one of the players contribute a certain amount of money to a pool. You may play the Pool Rummy in the 101 or 201 options. The rules are similar to the Points Rummy until all the games except one are eliminated from the game. They have to attain 101 or 201 points depending on the version of Pool Rummy that they choose to play. The remaining player is considered the winner.

This type of Rummy is most popular in sub continental India. It is a fun game, and it is mostly popular in Diwali. It is a great choice for experienced players and those who are trying to polish their skills. The rules of the game are similar to the 13 Card Rummy, but it has a few adjustments. The Indian Marriage uses three decks of cards and printed Jokers. The players get 21 cards each. They are expected to create three or more pure runs and use the remaining cards to create sets and sequences.

The game has Value Cards which play a role similar to Jokers. They can substitute any of the other cards. They also hold extra points. The penalties for dropping out of a game are different too. If a player has a hand that consists of the combination 7,8, and 9, they have a Marriage Hand. Getting a Marriage Hand earns you 100 points from your opponents.

This type of Rummy includes two or four players. They use tiles instead of cards. The game merges Rummy with Mahjong. It is mostly popular in American and European countries. In 1980, it won the ‘German Game of The Year. In 1983, it won the ‘Dutch Game of The Year.’ When laying the game, players use 104 tiles of different colors. They have the numbers one to 13. The colors are black, orange, blue, and red. There are two Jokers and two tiles with the same number and color. Players can use tiles that have already been played. They store their tiles in a rack and ensure that other players cannot see their tiles. The game starts with players getting 14 to 16 tiles. The player who manages to lay down all their tiles before the others wins. 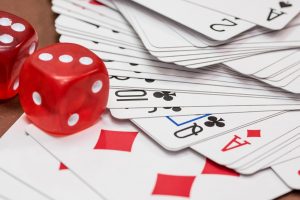